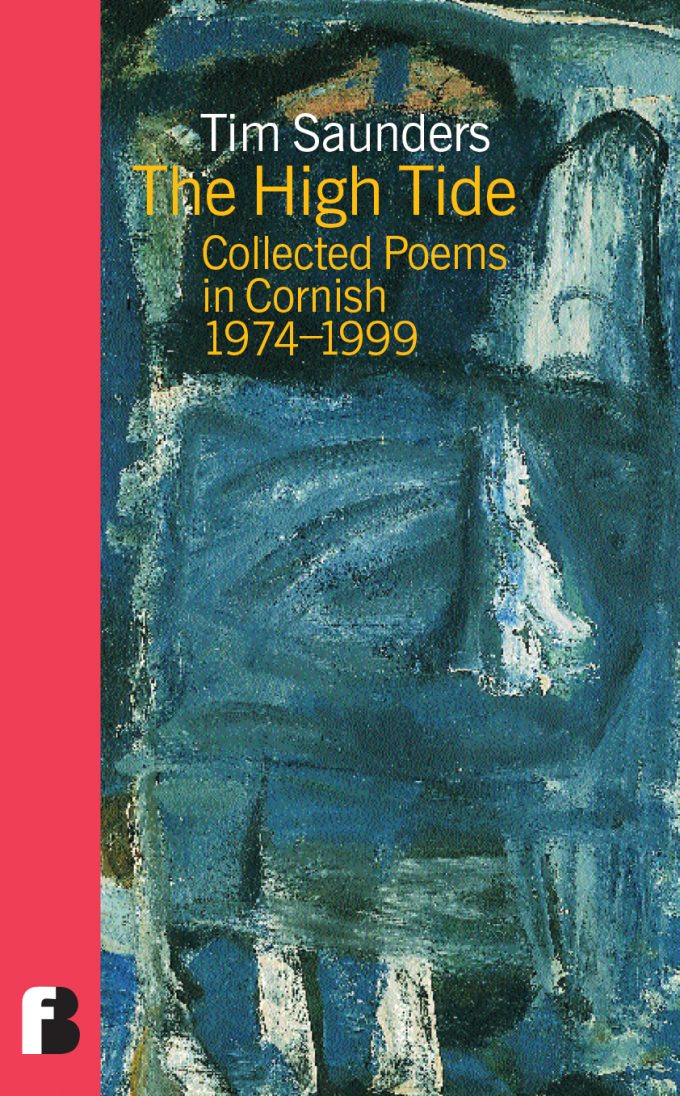 This collection contains most of Tim Saunders’ poetry in Cornish to date. The poems are accompanied by the author’s own prose translations into English.

Cast in a wide range of poetic forms, Saunder’s work is varied in mood and theme, moving from the lyrical and intimate to meditations on war and explorations of the history and culture of Cornwall. This collection contains most of Saunders’ poetry in Cornish to date. The poems are accompanied by the author’s own prose translations into English, giving the reader with no knowledge of Cornish a strong sense of the power of his writing.

Tim Saunders is one of the leading poets writing in Cornish today. He is the author of poetry and jounalism in Welsh, Irish and Breton as well as Cornish and he is the editor of The Wheel – an anthology of modern poetry in Cornish 1850–1980. He is a bard of the Cornish Gorseth.

‘No other writer in Kernewek has produced anything comparable to it.’

World’s early morning
places a horizon round all things visible:
slopes of a slate hill alive with mists
setting a wall for the world.

Vigour and strength
of people coming together in common right:
strong cry of justice echoes,
dealing with the rights of buying and selling.

Selling and buying
of sad or joyous speech:
here at times we shall exchange
kind act or honest memories.

Let us dawdle with a glance to the four points of the compass,
in the kingdom of wonder on sea and land,
as the long grey roads bind the ridge.

A bird will wander
a battlefield at the behest of breeze,
riding towards its fields
without shelter or boundary or concealment.

Floods of colour
painting slopes worthy of wine:
a hare and the shadow of death
weave together across a slope.

So suddenly and heavily with the speed of fire
through the cool clear air falls a star of pain:
within hearing of a church bell, hunger stabs into flesh.

Tim Saunders’ Cornish-language poem cycle, Awen, Aval and Awedh is currently in preparation, with stunning lino cuts by Tim Roberts. The poems are translated into English by Alan M Kent. Available iin a limited edition in 2010.

Poet enriches the language with his impressive work

A new volume of work by poet Tim Saunders represents one of the most significant steps forward in the state and development of Cornish literature It is possible it is the most impressive single volume since Whitley Stokes' 1872 edition of the Camborne Mystery Play, Bewnans Meriasek. This may seem an outrageous suggestion. Yet no other writer in Kernewek has produced anything comparable to it. Here are 68 poems, occupying 198 pages, some long, some very brief, all highly organised; employing subject matters remarkably varied – historical, mystical, religious, of war and battles, of love, politics, many of them legendary and mythical. The collection as a whole enriches and enlarges not only.our choice of what to read in the Cornish language but our whole conception of what the language can achieve, placing it on a par with many other minority tongues which have long possessed a more extensive and up-to-date literature than we have hither to been able to claim. Saunders himself is both a polyglot and polymath, a scholar in a variety of fields. He is a linguist who, in the tradition of Henry Jenner, Caradar, John Page and others, has espoused Cornish as his chief love and vocation. He is a Cardiff Cornishman (as was the Grand Bard Mordon, Robert Morton Nance himself) and as such has a particular Welsh centred view of Kernow and Kernewek. He must inevitably be forever comparing us with the Welsh and the Irish (whose literatures are legendary and dominant in the Celtic consciousness) and he is always aware of the effects of the considerable emigration of Cornishmen to South Wales in the l9th Century, and of Cornwall's position as an essential link with all the Celtic nations. In his long poem Ann Nown Meur (The Great Hunger), he not only commemorates the horrific events in Ireland during the Potato Famine, but the part played by Charles Trevelyan, Assistant Secretary to the British Treasury, and also the action of Delabole quarrymen who in 1847 marched down to Wadebridge to prevent the export of Cornish wheat and to demand affordable food. Among poems that sound like ancient oracular and Druidic verse is one entitled Ann Gwydr-Miras (The Looking Glass), composed of l l stanzas of 10 lines each, in strict rhyming and rhythmic form, using an echoing refrain reminiscent of some of WB Yeats' verse: Mir ha' preder, preder ha' mir, Gwelez ann gow, gwelez ann gwir! (Look and think, think and look See the lie, see the truth!) In contrast there are poems like Kyweithas ann Gernywyon, dy'Gwoal Bryan, 1985, celebrating a memorable Cornish gathering in Cardiff. Some of the verse touches a deeply religious chord – like Ty Arloeth Gwynn (Thou Blessed Lord) and Geni Flamm (Birth of a Flame) – and there are a number of excellent love poems, almost but not quite explicitly erotic. We have moving elegies for the Cornish heroes of the 1497 Rebellion – Elegy for Three, and Myc'hol Yosef, Kwsk yn Kres (Michael Joseph, Sleep in Peace). Saunders has consistently attempted to revive the old Celtic three-line verse, with its interior rhymes. For example, Hikka Trev Vedhyg (Richard Trevithick) reads: Ann hoarn h'ann tan a'dhynyth an toth Yn kreuth vaen koth dre nerth ann daren, Ha'nn kledhrow a'gan serc'h bellder del goth (It is the iron and fire that will beget speed In the womb of old stone through the strength of thunder, And the rails that will sing fitting love of distance). Saunders' system of spelling is personal and idiosyncratic, combining elements of Welsh with Unified and Kemmyn Cornish. But no Cornish student should be discouraged, as his poems are accompanied by literal yet illuminating translations which users of all Cornish orthographies will relate to. His copious references and notes are learned and rewarding. This handsome volume is excellent value for money and an amazing statement of faith in the Cornish language and its literature, and both poet and publisher are to be heartily congratulated on the venture.