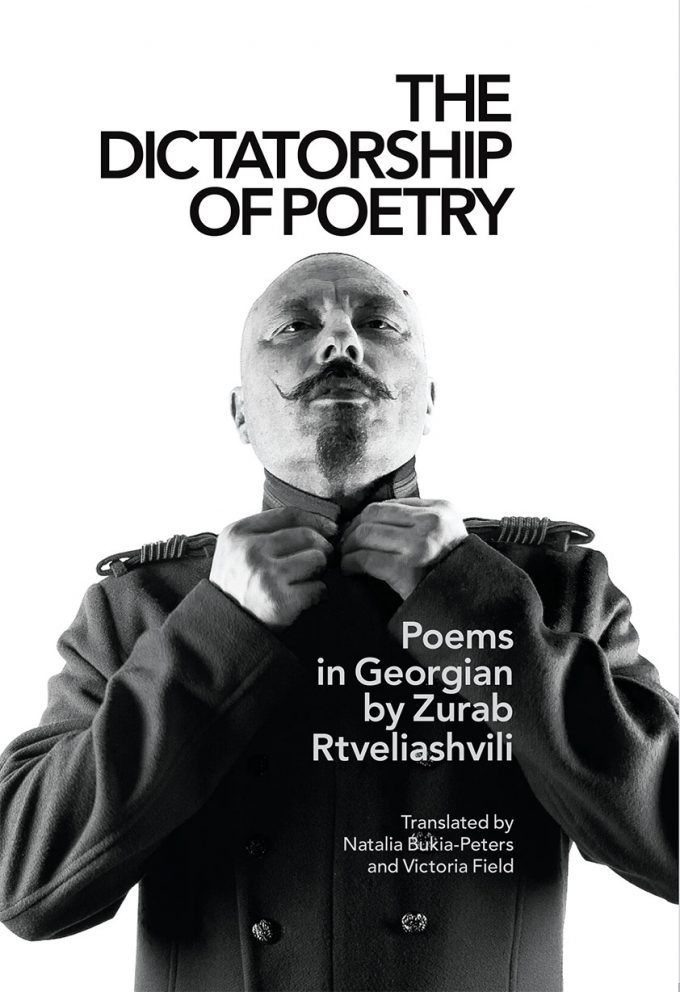 The Dictatorship of Poetry

This is the first translation into English of a major collection of work by the celebrated Georgian poet, performer and human rights activitist, Zurab Rtveliashvili.

This is the first translation into English of a major collection of work by the celebrated Georgian poet, performer and human rights activitist, Zurab Rtveliashvili.

The Dictatorship of Poetry includes poems written before his emigration to Sweden and more recent work completed since.

Zurab Rtveliashvili’s poetry is avant-garde and full of linguistic and sound experiments and at the same time highlights and reflects on key socio-political issues whilst preserving the dynamism of his poetry. According to Zurab Rtveliashvili, today’s reality means we are all living in a world dominated by a verbal industry which labels everything according to a special code. With his unique poetic process, Zurab Rtveliashvili breaks free from these shackles and shows his readers how language can go far beyond simple alphabetical notations and grammatical norms.

Zurab Rtveliashvili is a Georgian poet, performance artist and human rights activist. He was born in 1967 in the city of Karaganda in Kazakhstan and grew up in Tbilisi where he took a degree in Jurisprudence at Tbilisi State University. In his twenties, he was an anti-Soviet dissident and participated in the National Liberation movement of Georgia.

In 2003, his civil disobedience texts acted as a catalyst for the pacifist ‘Rose Revolution’ in Georgia. In the following years he was continuously arrested for his performances and served a prison sentence as a prisoner of conscience. In 2010, Rtveliashvili was offered political asylum in Sweden. In 2012 the European Court ruled against the state of Georgia for violating his human rights.

Rtveliashvili belongs to the generation of post-Soviet artists who have radically changed the course of Georgian literature. He introduced a new vision with linguistic and conceptual experiments in his poetry. In 2012, he was the Winner of Voloshin’s International Creative Symposium.

Rtveliashvili has appeared in several films, and has published five collections of poetry. His work has been translated into into Armenian, Azerbaijani, Bengali, Dutch, English, French, German, Iranian, Japanese, Russian, Swedish and Ukrainian.

Natalia Bukia-Peters is a freelance translator, interpreter and teacher of Georgian and Russian. She studied at Tbilisi State Institute of Foreign Languages before moving to New Zealand in 1992, then to Cornwall in 1994.  She is a translator for the Poetry Translation Centre in London and a member of the Chartered Institute of Linguists, and translates a variety of literature, poetry and magazine articles.

Victoria Field is a writer and poetry therapist. She has published three collections of poetry, most recently The Lost Boys (Waterloo, 2013) which won the Holyer an Gof prize. Her memoir Baggage: A Book of Leavings was published by Francis Boutle in 2016. She has won many awards for her fiction, drama and poetry, and her work has been broadcast on BBC Radio 3 and 4.

Published translations by Natalia and Victoria include short fiction (Sex for Fridge by Zurab Lezhava and It’s Me by Ekaterina Togonidze in Dalkey Archive’s Best European Fiction anthologies, 2011 and 2014 respectively), two collections of poetry by Dato Magradze (Giacomo Ponti, 2012, and Footprints on Water, 2015, both with fal) and a book-length collection of short stories, Me, Margarita by Ana Kordzaia-Samadashvili (2015, Dalkey Archive). In 2016 they translated the collection A House with No Doors  – Ten Georgian Women Poets with Francis Boutle Publishers.