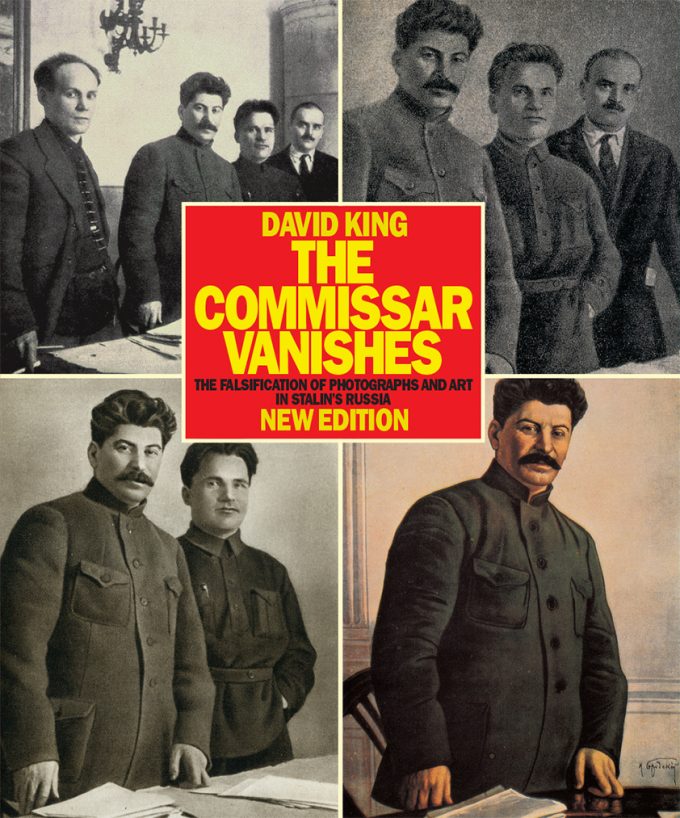 The Falsification of Photographs and Art in Stalin’s Russia

Sinister, tragic and often farcical, the images reproduced in this book draw the reader into a world of political surrealism that offers a harsh warning from the past about what is still happening in the present.

“David King has done a remarkable, meticulous job… An incomparable volume… This extraordinary combination of tragedy and farce, which evokes strong, mixed emotions, makes King’s album a work of art”

“Rarely if ever has what George Orwell called the ‘memory hole’ received the kind of stunning real-life elaboration it gets in The Commissar Vanishes. This lush volume is a fascinating and sobering study of the rewriting of history”

“The most precise visual metaphor of Stalin’s repressions”

The Commissar Vanishes was declared an immediate classic on its first publication in New York, and has been hailed internationally as a brilliant and indispensable record of one of the darkest chapters of modern history. Throughout Stalin’s reign, from the late 1920s to the early 1950s, the physical eradication of the dictator’s opponents at the hands of the secret police was swiftly followed by a second death – the victims’ obliteration from all forms of pictorial existence. Photographs for publication were retouched and restructured with airbrush and scalpel to make the once famous vanish. At the same time, ordinary citizens, fearful of being caught in possession of material considered “counter-revolutionary” or “anti- Soviet”, were forced into defacing their own copies of books and photographs, often savagely attacking them with scissors or India ink in nationwide campaigns against the “relaxation of vigilance” and “collaboration with the enemy”.

Sinister, tragic and often farcical, the images reproduced in this book draw the reader into a world of political surrealism that offers a harsh warning from the past about what is still happening in the present.

David King is the author of Red Star Over Russia: A Visual History of the Soviet Union from 1917 to the Death of Stalin (2009), winner of the Bannister Fletcher Award for best art book of the year 2010, Russian Revolutionary Posters: From Civil War to Socialist Realism, From Bolshevism to the End of Stalinism (2012), and numerous other books on Soviet subjects. He lives and works in London.

This new, enlarged and revised edition of The Commissar Vanishes is its first paperback publication  in the UK .

Everyone should read it – a pictorial mausoleum of truth, lies and death