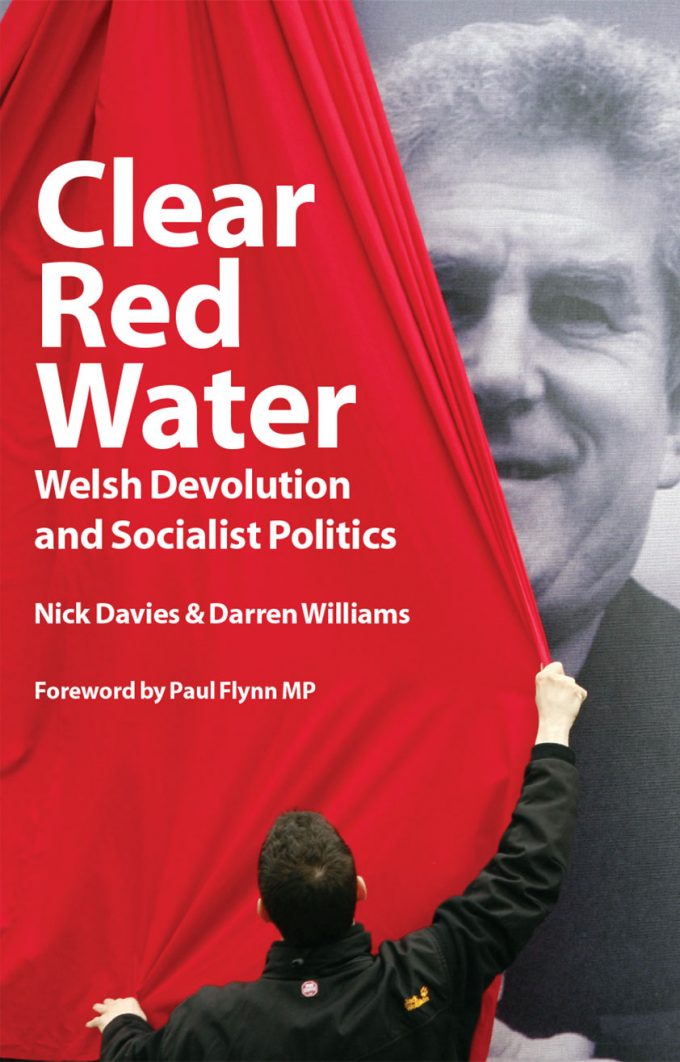 By Nick Davies and Darren Williams

This book is a timely examination of the devolution process and the ambitions of the ‘clear red water’ programme, arguing that it draws on Wales’ rich traditions of radical politics, as well as a resurgent national consciousness. Warning of the dangers posed by the incomplete devolution process and the democratic deficit in Labour politics, the authors call on Welsh Labour to consolidate its initial achievements and follow a consistently socialist path to place Wales in the forefront of the struggle for a just and equitable world order.

While the Labour party in Westminster moves further from its roots, alienating its traditional supporters by its readiness to follow the United States into disastrous foreign wars, its tolerance of inequality and its commitment to the free market, a Labour-led administration in Wales has pursued a very different programme, underpinned by a sincere commitment to equality and social justice.
In 2002, Welsh first minister, Rhodri Morgan, said that these policies were putting ‘clear red water’ between Wales and Westminster.

This book is a timely examination of the devolution process and the ambitions of the ‘clear red water’ programme, arguing that it draws on Wales’ rich traditions of radical politics, as well as a resurgent national consciousness. Warning of the dangers posed by the incomplete devolution process and the democratic deficit in Labour politics, the authors call on Welsh Labour to consolidate its initial achievements and follow a consistently socialist path to place Wales in the forefront of the struggle for a just and equitable world order.

Future Imperfect: from the blog of Paul Flynn MP

A bracing afternoon of Old Time Socialism was enjoyed in Swansea this afternoon with the launch of Clear Red Water.

All recognised that we are a turning point in history.  The past was an age of extravagance, self-indulgence and the profligate plundering of the planet. The future will be an age of austerity, thrift and reverence for our fragile human habitat.

There were powerful contributions from the audience who were united in their determination to continue the legacy of Rhodri Morgan. Tomorrow he will set out his plan for the future in his final speech to conference as Leader. He remains unique at a national leader with a 65% approval rating after being 10 years in office.

Wales will value the legacy that our clear red water has delivered. England would benefit by following our example. 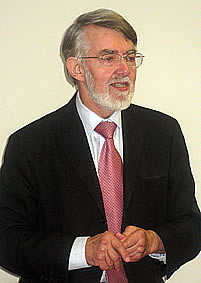 Nick Davies and Darren Williams are chair and secretary of Welsh Labour Grassroots.

Nick Davies reflects on the result of the 2010 general election.

6 May was to be the start of a new era in Wales, the post-Labour age. After a decade of bad election results for Labour, culminating in being third place in 2009’s European poll, having to govern in Wales in coalition with Plaid Cymru and with an exhausted and unpopular government in Westminster, meltdown was surely imminent. The sense of impending collapse was heightened by the Tories’ talk of winning a “rugby team” of 15 seats, and the Liberal Democrats’ rhetoric of “new politics”.

However, rumours of Labour’s demise were exaggerated. With 26 seats out of 40 won by Labour, Wales is still largely red. Wiped out in 1997, the Tories, with 8 seats, up from 3, have regained a foothold in the coasts, borders and suburbs. Liberal Democrat targets Swansea West and Newport East held out while Plaid similarly failed in Llanelli and Ynys Môn. However, while the vultures can stop circling for now, Labour’s condition is far from robust; without surgery further deterioration is likely.

Whether this was just another stage in Labour’s long, slow decline in Wales or the start of a revival depends on which end of the telescope we look through. Only in terms of seats can Labour’s results be regarded as any kind of success. Labour’s share of the vote, its lowest in Wales in a general election since 1918, was 36.2 per cent, the previous low point being 38 per cent in 1983. The swing against Labour was generally similar to that in England, about 5 per cent, although in some Valleys constituencies it was much higher, signs of a clear intention to punish Labour, with no single party the beneficiary. Only the huge majorities in many seats cushioned the impact of the swings. However, Labour’s share of the vote was up from the 32.4 per cent in the 2007 Assembly election and a significant recovery from the 20.28 per cent in 2009’s European elections. The average turnout in Wales was 64.9 per cent, below the UK average of 65.1 per cent, an improvement on 2005, but, compared to the turnout of 84.8 per cent for the 1950 general election, for example, very low indeed.

These figures and the experiences of Labour canvassers on the doorstep tell us that Labour’s vote reduced but did not collapse. Labour still has a strong and deep-rooted electoral base. However, its core voters, whose loyalty had been tested almost to destruction by the New Labour years of privatisation, Iraq and post office closures, and in conditions of insecurity engendered to a large extent, by New Labour’s addiction to turbo-charged free-market capitalism, were faced, for the first time in thirteen years with the prospect of a Tory government. They did not like what they saw. As an expression of loyalty their vote for Labour was reluctant, grudging even, rather than heartfelt, but nonetheless, it existed. For many Labour voters in Wales, the memories of the 1980s, the mass unemployment, the poverty and the malign neglect by Westminster, were still raw. They remembered life before Welsh devolution and before the minimum wage. Looking at seats rather than votes may be viewing  the election through the prism of the UK’s semi-democratic electoral system, but those huge majorities, often derided by Labour’s opponents as unthinkingly tribal (“a monkey with a red rosette would win here”) really mean something. They have been banked up over the decades in many Welsh communities as a reflection as much of loyalty to Labour as a visceral response to Tory policies of the 1930s, then the 1980s.

The fact also that Labour MPs retained their seats in Llanelli and Ynys Môn, which have Plaid AMs, suggests that voters made a conscious decision to vote Labour this time to try to keep the Tories out. However, there is no denying that overall, Labour’s vote declined.

New Labour was founded on two assumptions. One was that free market capitalism was the only way of organising society. The other was that Labour’s traditional voters, with nowhere else to go, would carry on voting Labour. Both have been proved false. People in Wales, and elsewhere, who have habitually voted Labour have done so for a reason. They wanted protection and provision: health, education, homes, pensions, jobs when they could work and benefits when they could not, and protection in the workplace. They wanted to be shielded from the often brutal insecurities of the free market. They saw themselves as part of a community, rather than as self-interested individuals. When New Labour ceased to provide this protection, at least to the extent that Labour had done so previously, many voters stayed at home. That is why the turnout figures are significant. People vote when they think there is a real choice. The insecurity resulting from unfettered globalisation, the lack of social housing, the lack of manufacturing jobs as a route into employment and the strain on public services resulting from cuts and privatisation, as well as the virtual impossibility of effective trade union activity, all as a result of Tory then New Labour policies, have resulted in feelings of alienation and hopelessness. This has also resulted in a search for scapegoats, for example, in Swansea East (where the turnout was a miserable 54 per cent) there was a four-figure vote for the BNP.

Opposition and a leadership election will be a wasted opportunity if the only result is some repositioning and rewriting of history by New Labour’s leadership. Labour must realise that the policies of the last thirteen years have alienated the coalition of voters which brought it to power. It has to reconnect with that coalition. Policy-making, presently executed on the hoof by ministers (or shadow ministers) to suit the interests of big business must once again be the property of the members.

For policy alternatives Labour need not look very far. Since 2002, Welsh Labour has taken a different path from New Labour in public service provision. Public services are just that, not commodities, while services users are citizens, not consumers. Wales has mostly avoided ruinous Private Finance Initiative schemes (there are far fewer in Wales than in England), and has rejected City Academies and Foundation Hospitals, to which English voters have been told there is no alternative. The Assembly Government is constrained in what it can do by the present limited devolution settlement and financial dependence on Whitehall. The etiquette of devolution has prohibited Welsh Labour from proclaiming this divergence; media indifference, inside and outside Wales, means that many policies pass under the radar. Indeed, Welsh Labour has been punished, as in 2007, for crimes and misdemeanours quite outside its control.  Surely, the present ferment is the time for policies “made in Wales” to become universal.

Nick Davies gives his views of the Labour Euro-election disaster in Wales and reports on the conference ‘Wales and the Ecomomic Crisis’.

It isn’t difficult to  guess the reasons. A recession, ministers plotting against each other, and, of course, the expenses scandal. What these have in common is that they all the fault of Westminster.  However, Peter Hain has wasted no time in declaring that these results show that Welsh Labour ‘has to change’. This is a scarcely veiled attack on Welsh Labour’s ‘Clear Red Water’ agenda which avoids the market-driven policies that have alienated so many voters in England. The problem is that Welsh Labour observes a form of devolution etiquette by refusing to distance itself from New Labour, trying to achieve a kind of ‘socialism by stealth’. Many of Welsh Labour’s progressive policies are still bedding in, their benefits not yet apparent, and go unreported by the media.

It is therefore all the more important that every socialist in Wales, or anyone interested in Welsh devolution should read Clear Red Water, a timely examination of the strengths and weaknesses of Welsh Labour and the Welsh devolution process.

A central argument of Clear Red Water is that socialists in Wales must set aside the destructive tribalism by which socialists in the Labour Party and Plaid Cymru, instead of collaborating on where they can agree, barely speak to each other. An important step towards bringing this about was taken on 13 June.  Both the authors of Clear Red water were participants in a Conference: ‘Wales and the Economic Crisis’ organised by the Morning Star. Speakers included Welsh Labour Assembly Members Christine Chapman and John Griffiths and Plaid AMs Bethan Jenkins and Leanne Wood.

The conference looked at the loss of jobs and the resulting insecurity and social dislocation, and at the disaffection with mainstream politics, and especially with Labour, expressed in the European elections. Speakers from the GMB, Community and PCS unions called for more robust employment rights, stronger support for manufacturing and an end to privatisation. Several speakers acknowledged that reconstruction had to follow a more sustainable model than before.

There was greatest consensus about the need for the Assembly to take on stronger powers and for the left to play an active role in securing a ‘yes’ vote in the promised referendum. The people of Wales will be persuaded to support deeper devolution only if it is clear that it will make a real difference to their lives. It is important that the left continues the discussion as to how it can contribute to this objective.

Nick Davies is the chair of Welsh Labour Grassroots and the co-author of Clear Red Water: Welsh Devolution and Socialist Politics.